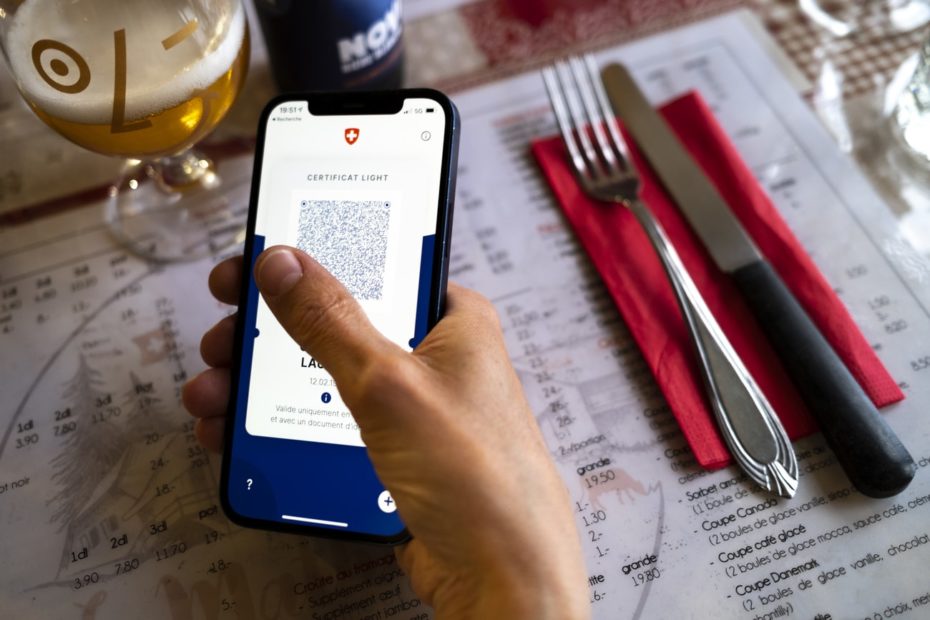 The Swiss government drops most coronavirus restrictions from February 17, 2022 as the record levels of infections triggered by the Omicron variant have not translated into a peak of hospitalizations.

Bern (SWI) – From today, people in Switzerland will no longer have to show a Covid certificate to enter bars, restaurants and other indoor venues such as sports facilities, theatres or concert halls. The controversial pass had been used to prove its holder was vaccinated, had tested negative or had recovered from the virus.

“Switzerland is taking a decisive and important step towards normality,” Ignazio Cassis, who holds the rotating Swiss presidency this year, told reporters in Bern on February 16.

Authorities will nonetheless continue to provide Covid certificates, recognized by the European Union, for Swiss residents wanting to travel abroad.

The government also announcedExternal link at the highly anticipated press conference in Bern that there would be no further restrictions on the size of private gatherings in Switzerland, while large events would no longer have to apply for authorizations.

Masks will no longer be mandatory in schools, shops, concert halls or at work. But they will remain compulsory until the end of March on public transport and in healthcare facilities. The government has also kept in place a requirement for people who test positive for Covid-19 to go into isolation for five days.

These two remaining measures are aimed at protecting the most vulnerable, the government said. But if the virus situation improves, they could be lifted before the end of March.

The February 16 decision follows consultations with the cantons, parliament and relevant organizations, all of which supported the immediate lifting of restrictions while keeping the mask requirement for special circumstances. The cantons still have the possibility of introducing stricter measures if necessary.

The Swiss government had imposed tight Covid restrictionsExternal link from October 2021 after a surge in cases of the more contagious Omicron variant, but has since been easing them progressively.

Quarantine rules and a work-from-home order ended on February 3. All test and quarantine requirements for people entering Switzerland were also adapted in late January. From today, health-related measures for people entering the country are to be lifted. It will no longer be necessary to provide proof of vaccination, recovery or a negative test or complete an entry form, the government said.

However, the State Secretariat for Migration (SEM) confirms that the Federal Council’s decision to lift the health-related measures at the border on entry as of February 17, “does not change the continuing pandemic-related entry requirements for third-country nationals.”

It says travellers should continue to check on the official government TravelcheckExternal link or State Secretariat for MigrationExternal link (SEM) websites to see if you are allowed to enter Switzerland.

Switzerland follows several other European countries, such as Denmark, Britain, France and the Netherlands, which have been gradually loosening Covid measures in recent weeks.

The number of new coronavirus infections rose steeply in Switzerland from mid-October 2021 as the colder weather brought more people inside and the Omicron variant spread. On February 8, health experts announced that the number of new infections had finally peaked. They have since been falling steadily.

A total of 21,032 new cases were reported on February 15. The seven-day average daily figure is down by almost a quarter compared with the previous week.

“The epidemiological situation continues to develop positively,” the government said in a statement. “Thanks to the high level of immunity in the population, it is unlikely that the healthcare system will be overloaded despite the continued high level of virus circulation.”

“This means that the conditions are in place for a rapid normalisation of social and economic life,” it added.

More than 90% of Switzerland’s population of 8.6 million people have developed a certain immunity to the virus, having either recovered from an infection or been vaccinated, officials noted.

More than 12,200 people have died from Covid in Switzerland. Around 68% of the population has received two doses of vaccine.

The World Health Organization (WHO) has advised a cautious approach towards lifting restrictions, noting many countries have not reached their peak in Omicron cases.

On February 14, the WHO said health officials are turning their attention to growing rates of Covid-19 infection in eastern Europe, where six countries – including Russia and Ukraine – have seen a doubling in case counts over the past two weeks. (SWI)