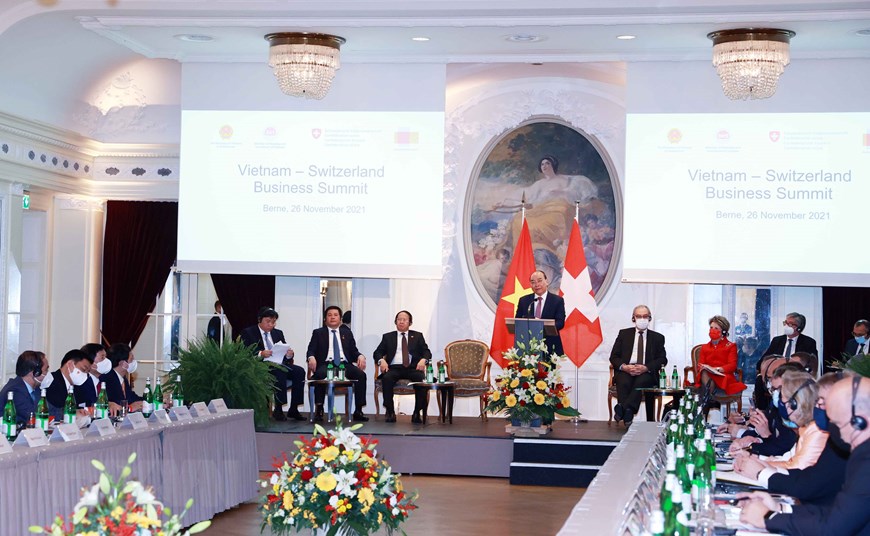 SVBG President Nguyen Thi Thuc had the opportunity to join a few of his important activities in Bern and has some reflection on the two countries’ economic relations.

Bern (SVBG) – Vietnam’s President NGUYỄN Xuân Phúc paid a 4-day official visit to Switzerland from 26-29 Novemebr 2021. He and his hundred-strong entourage left Geneva’s Cointrin airport in the morning of November 29 for the next visit to Russia.

SVBG President Nguyen Thi Thuc had the opportutity to join a few of his important activities in Bern and has some reflection on the two countries’ economic relations, as follows:

Morning November 26, as a Vietnamese independent journalist accredited by the Swiss Foreign Affairs Ministry, she witnessed the official welcome ceremony accorded to President Phúc by President of the Confederation Guy Parmelin and attended the joint press conference followed their meeting at Lohn Manor, a charming estate in the suburban of Bern City.

Major news announced at the press conference by President Guy Parmelin was that the two sides agreed to restart soonest possible the negotiation of the Free Trade Agreement between Vietnam and the European Free Trade Association (EFTA)/Switzerland, aiming to speedily achieve the FTA.

The Summit at Hotel Bellevue Palace Bern saw both Presidents attending. It’s notable to remind that rotating President Guy Parmelin is the Minister of Economic Affairs, Education and Research.

President Phúc was flanked at the Summit by a host of Vietnam’s ministers, deputy ministers, provincial leaders and top executives of 25 big companies.

On the other side, the Swiss Gov’t Delegation joining Mr Guy Parmelin includes Mrs Marie-Gabrielle Ineichen-Fleisch – State Secretary of the State Secretariat for Economic Affairs (SECO), a number of SECO’s heads of division, and Mrs Anna Mattei – Head of Regional Coordination Southeast Asia and Pacific of the Ministry of Foreign Affairs (FDFA).

The Summit organized by economiesuisse deserved a big applause for its wise seating plan and content structure that maximized Swiss businesses’ exposure & chance to voice their concerns and business intentions that got favorable responses from Vietnamese leaders, she said.

The Summit was followed with a networking cocktail where she had the chance to talk to several Swiss government officials and business executives.

She wrote an article for Thanh Niên, an influential newspaper of Vietnam she worked 12 years for, describing how the Summit should be a learning model for similar business dialogue from an organizational point-of-view.

She also gave her views in a Vietnam Television VTV4’s piece on the significance of the presidential visit. Swiss Ambassador to Vietnam Ivo Sieber and SVBG Secretary General Axel Armellin-Nguyen were also giving their opinions in this news.

In her interview with Zing News, a well-read online media in Vietnam, SVBG President Nguyen Thi Thuc highlighted the FTA commitment and the Business Summit, thanks to which she believes more bilateral investments and trade will follow, as key achievements of her President’s visit to Switzerland. SVBG