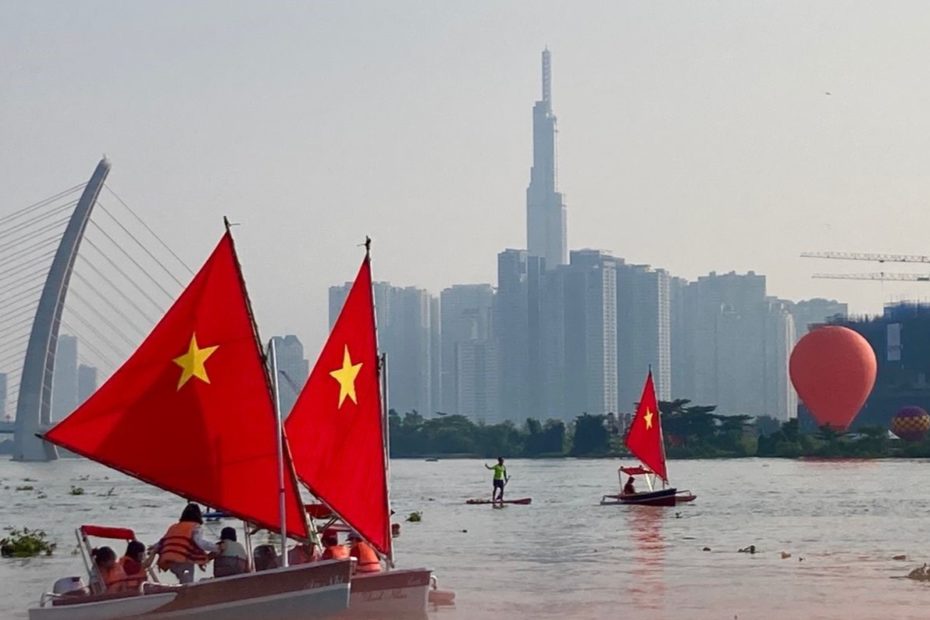 Moody’s Investors Service (“Moody’s”) has today upgraded the Government of Vietnam’s long-term issuer and senior unsecured ratings to Ba2 from Ba3 and changed the outlook to stable from positive.

Singapore (MOODY’S) – The upgrade to Ba2 reflects Vietnam’s growing economic strengths relative to peers and greater resilience to external macroeconomic shocks that are indicative of improved policy effectiveness, and which Moody’s expects to continue as the economy benefits from supply chain reconfiguration, export diversification and continued inbound investment in manufacturing.

The stable outlook reflects a balance of risks to the rating.

On the positive front, Moody’s expects continued improvements in economic competitiveness to support rising incomes and advancements in fiscal prudence demonstrated through the execution of a more systematic, long-term debt management strategy and an increasing emphasis in fiscal policy on long-term challenges, including improving worker productivity and mitigating against physical climate risks.

On the downside, the relatively low capitalization levels of state-owned banks coupled with high domestic credit growth and potential risks from the real estate sector pose risks to the real economy in the event of a shock.

Concurrent to today’s action, Vietnam’s local- and foreign-currency ceilings are raised by one notch to Baa2 from Baa3 and Ba1 from Ba2, respectively.

The foreign currency ceiling at Ba1, two notches below the local-currency ceiling, reflects existing constraints to capital flows that point to possible transfer and convertibility restrictions being imposed at times of perceived need.

RATIONALE FOR THE Ba2 RATING

The increasing demand for Vietnamese exports through the coronavirus pandemic underpins the growing competitiveness of Vietnam’s manufacturing sector, which has outperformed regional peers in the attraction of foreign direct investment (FDI) and has driven a rapid rise in per capita income.

Trade tensions between the US and China, as well as the supply chain disruptions due to the waves of lockdowns within China, have accelerated manufacturing investment in Vietnam given the similarity of Vietnam’s exports compared with China’s among Asia-Pacific economies, along with an ample supply of relatively low-cost labor.

These trade agreements will strengthen Vietnam’s competitive position in lower-value products such as footwear, garments and agricultural goods, while placing it firmly in higher-value-added regional tech supply chains for smartphones, computers and other electronic products.

Structural risks to this economic trajectory may emerge over the next 5-10 years as the existing stock of port, airport, electricity and railways infrastructure and the working age population, which will peak around 2035, may be insufficient to absorb large-scale shifts in supply chains to Vietnam from China and other higher-wage locations of production.

Moody’s expects the authorities to seek to address these challenges through investment in education and worker training to support higher productivity and employment in higher value-added activities, while targeting inflows of FDI into sectors and activities that lead to greater direct spillovers to domestic suppliers.

Fiscal policy effectiveness has improved, including a greater emphasis on medium-term budget planning and the deepening of domestic, low-cost financing sources.

The National Assembly has also lowered the statutory public debt ceiling to 60% of GDP from 65% to better anchor debt levels while preserving fiscal flexibility amid the ongoing economic recovery.

However, transparency regarding contingent liabilities remains limited, including the size and financial performance of large state-owned enterprises, and delays in the execution of the government’s large public investment budget are credit constraints.

Despite below-potential growth in 2021, Vietnam’s fiscal performance was stable, recording a 3.4% of GDP deficit with revenue collection exceeding its target by 16.8% – partially due to companies’ lower than expected uptake of stimulus support measures such as corporate income tax deferrals.

Vietnam’s government debt burden registered a moderate rise to 39.1% of GDP in 2021, higher than previously forecast but comparable to levels in previous years and below the statutory public debt ceiling.

For 2022, Moody’s expects the fiscal deficit to be marginally higher at around 3.8%, in line with the Ba-rated median, as the authorities implement the Socio-Economic Recovery and Development Program, valued at VND350 trillion ($14.9 billion, or 4.1% of 2021 estimated GDP).

The program cuts the value-added tax for most sectors, provides interest rate subsidies on loans to businesses and allocates additional expenditure toward public investment in transport, IT infrastructure, prevention of riverbank and coastal erosion and other climate change adaptation projects.

Moody’s expects Vietnam’s fiscal deficit to consolidate to around 2.7% by 2025, with the government debt burden set to decline to around 37%.

Fiscal strength will be further supported by improved government liquidity and debt affordability, which has been well-anchored by lower domestic borrowing costs brought on by capital inflows and high domestic savings that have allowed the government to increasingly source budget financing from domestic institutional investors at longer tenors.

The authorities are now embedding measures in fiscal policy planning to address long-term challenges such as environmental risks, which likely signal a significant increase in capital expenditure.

Moody’s assesses that the country has highly negative credit exposure to physical climate risks including coastal flooding, droughts and water management risks related to the impact of industrial pollution, urbanization and hydroelectric development on the Mekong River, which supports the bulk of Vietnam’s rice and aquaculture output.

However, there is greater government policy focus on these challenges. For example, the government’s National Climate Change Strategy to 2050 will involve multi-ministerial efforts to reduce Vietnam’s greenhouse gas emissions by addressing energy consumption, forestry and waste management.

RATIONALE FOR THE STABLE OUTLOOK

The stable outlook reflects a balance of risks. On the positive side, upward credit pressures are driven by expected improvements in economic strength and fiscal fundamentals that illustrate gains in policy effectiveness and further integration with global value chains.

However, downward pressures may emerge from external uncertainties related to slowing global growth and risks in Vietnam’s financial system that may weigh on economic potential.

Specifically, Moody’s assesses that the institutional capacity and frameworks to manage complex emerging risks, such as financial stability in the nascent corporate bond market, are still evolving.

Financial system risks are amplified by Moody’s assessment that capitalization of Vietnam’s banking system remains relatively low, particularly given uncertainties from exposures to the household and real estate sectors and a continued rise in corporate leverage.

Domestic credit and domestic banking system assets as a percent of GDP have increased further to 124% and 187% in 2021 respectively, among the highest levels among rated sovereigns in the Ba and Baa tiers.

Although the government has been restrained in recent years in its provision of direct capital support to state-owned banks, the impact of a banking system credit event would have significant indirect effects on the economy given the importance of bank lending to domestic investment, and would undermine foreign investor confidence in the execution of macroeconomic policies.

This reflects gaps in institutions and governance strength that will take to time to address, including the limited transparency of regulatory and economic policies and fiscal accounts, and pending improvements to the corporate governance of state-owned enterprises that would lead to their restructuring or divestment.

Social risk exposure balances demographic advantages and robust provision of basic public services such as healthcare against wide skills and income gaps between the rural and urban populations.

Governance limitations including weak legislative and executive institutions constrain policy effectiveness and transparency, but have been increasingly balanced by strengthened fiscal and monetary policy effectiveness that has helped to increase Vietnam’s resilience to shocks.

The reliance of a substantial part of the population on agriculture for employment exacerbates the potential economic and fiscal impacts of weather-related shocks, such as flooding and storm surges, as well as spillovers from the country’s large and fast-growing manufacturing sector, such as pollution.

The expected decline of the working-age population from 2037 is also likely to present challenges to growth and productivity, although government investments in education have the potential to improve worker skills and productivity over time.

Relative to peers in terms of level of economic development, Vietnam’s government has prioritized provision of housing, healthcare and education.

However, rising levels of economic and social inequality reflect generally weak provision of social services, with high levels of undernourishment and lack of access to clean drinking water.

The moderately negative influence of governance (G-3 issuer profile score) on Vietnam’s credit profile incorporates weak legislative and executive institutions that reduce the predictability and transparency of policy, which can hinder investor confidence, while taking into account the recent track record of effective and improved economic policymaking that has supported strong growth and boosted the economy’s global competitiveness.

Default history: No default events (on bonds or loans) have been recorded since 1983.

On 01 September 2022, a rating committee was called to discuss the rating of the Vietnam.

The main points raised during the discussion were:

The issuer’s economic fundamentals, including its economic strength, have not materially changed.

The issuer’s institutions and governance strength, have materially increased.

The issuer’s governance and/or management, have materially increased.

The issuer’s fiscal or financial strength, including its debt profile, has not materially changed.

Moody’s would likely upgrade the rating if there are signs that institutions and governance strength is improving, particularly with monetary policy and regulatory effectiveness. This could come about through the improved supervision of the banking system, reducing contingent liability and financial stability risks.

Signs that Vietnam’s economic strength is rising, for instance through its sustained ability to attract FDI and benefit from global supply chain restructuring, including the absorption of higher value-added production with greater linkages to domestic companies, would also indicate upwards rating pressure.

FACTORS THAT COULD LEAD TO A DOWNGRADE

Moody’s would consider a downgrade of the rating as a result of a re-emergence of financial instability, leading to higher inflation, a rise in debt-servicing costs or a worsening of the external payments position.

Such signs of stress could be related to the reversal of the current stabilization in the debt and deficit trajectory, potentially as a result of a sizable crystallization of contingent risks from either the banking system or state-owned enterprises.

Furthermore, evidence that a rise in geopolitical tensions disrupts Vietnam’s access to critical manufacturing inputs or erodes export and FDI competitiveness would be negative for the rating. MOODY’S