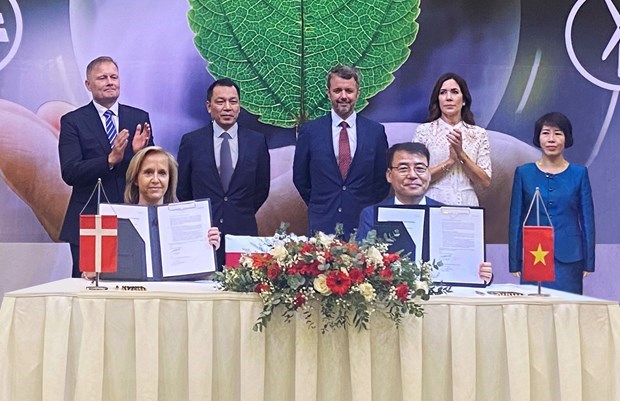 The beginning of November 2022 is cheered up in Vietnam with the debut of some big projects by Danish multinationals on the occasion of their Crown Prince Frederik’s official visit to the Southeast Asian country.

Ho Chi Minh City (SVBG) – The construction of the plastic construction toys group LEGO’s $1.3bn factory was kicked-off in the south on November 3, while energy group Ørsted’s partnership for an offshore wind power supply chain was set on November 1 in the central of Vietnam.

The new plant is the largest investment by LEGO in Vietnam so far and is part of its strategy to expand its supply chain network.

It marked an important milestone for LEGO as the group’s sixth factory worldwide and also the first carbon-neutral factory, said the group’s CEO Niels Christiansen.

“This not only allows us to bring learning-through-play methods to more children and create lasting growth in the Asia Pacific region, but it also enables LEGO to quickly adapt and respond to changes in consumer demand,” said he.

Located on a 44-hectare site, the size of 62 football fields, in the Vietnam-Singapore Industrial Park (VSIP) III, the new facility is expected to be put into operation in 2024 and generate around 4,000 jobs in the next 15 years.

It will become a place where the most advanced technologies will be applied to make molds, process and pack LEGO products.

Designed as a carbon-neutral facility, the factory will have solar panels on its roof and a solar power farm built on a neighboring land lot, meeting its total annual energy demand.

The factory will also use state-of-the-art energy-efficient production equipment and meet the Leadership in Energy and Environmental Design (LEED) Gold requirements.

The group will train high-skilled local workers to operate such equipment that ensure every LEGO piece has an accuracy rate of one-tenth of the thickness of a human hair, said the group’s statement.

Two days earlier, in the central province of Quang Ngai, the Danish energy multinational Ørsted and the Korean-owned heavy industry company Doosan Vina signed an MoU with the witness of Vietnam’s Deputy Minister of Industry and Trade ĐẶNG Hoàng An and Danish Crown Prince Frederick and Crown Princess Mary Elizabeth.

Under the MoU, Doosan Vina and Ørsted agreed to engage in non-legally binding discussions to develop the offshore wind supply chain in Vietnam, primarily focusing on, but not limited to, the offshore foundation structure monopiles.

This will satisfy requirements relating to the development of Ørsted’s portfolio of offshore wind farm projects in the central and the north of Vietnam as well as abroad.

The MoU also covers the terms and conditions relating to material sourcing, manufacturing and supply by Doosan Vina.

In addition, Ørsted will provide guidance and support to help Doosan Vina access markets throughout the Asia-Pacific and Europe. In return, the Vietnam-based firm will give “preferred customer” status to the Danish group.

Kim Hyo Tae, General Director of Doosan Vina, said the MoU with a leading corporation in the wind power sector is an important event for his company.

In addition to offshore wind power, Doosan Vina is also in the preparation stage for producing fuel cells and hydrogen in line with the orientations and commitments of the Vietnamese Government on a carbon-neutral future by 2050. SVBG