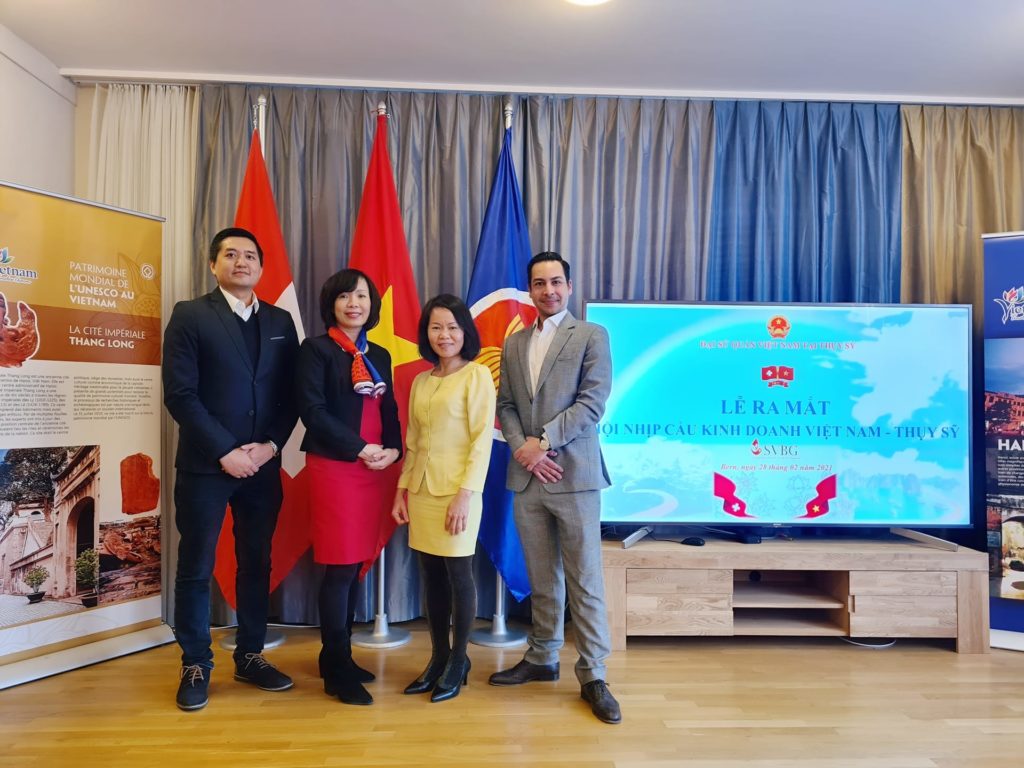 A nonprofit association, Swiss-Vietnamese Business Gateway (SVBG) aims to promote stronger economic relations between Switzerland and Vietnam by providing medium and small sized enterprises of the two countries with essential, practical and exclusive information, and assisting them through their pursuit of business objectives in the other’s land.

On its path to achieving goals in economic sphere, SVBG is equally passionate to bring the Swiss and Vietnamese peoples closer through cultural exchanges, networking and dissemination of information about country’s uniqueness, be it political system, education, or tourism and gastronomy.

SVBG was founded in Lausanne on 27 January 2021. The association is registered with the Commercial Register of canton of Vaud, Switzerland.

Our Mission: We promote stronger economic relations and better business environments for Swiss and Vietnamese enterprises.

Our Vision: We strive to become a solid, trustful and indispensable bridge linking up SMEs of Switzerland and Vietnam.

“The newly founded Association, SVBG, is dedicated to fostering strong relationships and strengthening relationships between Geneva, Switzerland, and Vietnam. We are delighted to celebrate the launch of this new business leverage between Vietnam and Switzerland.” 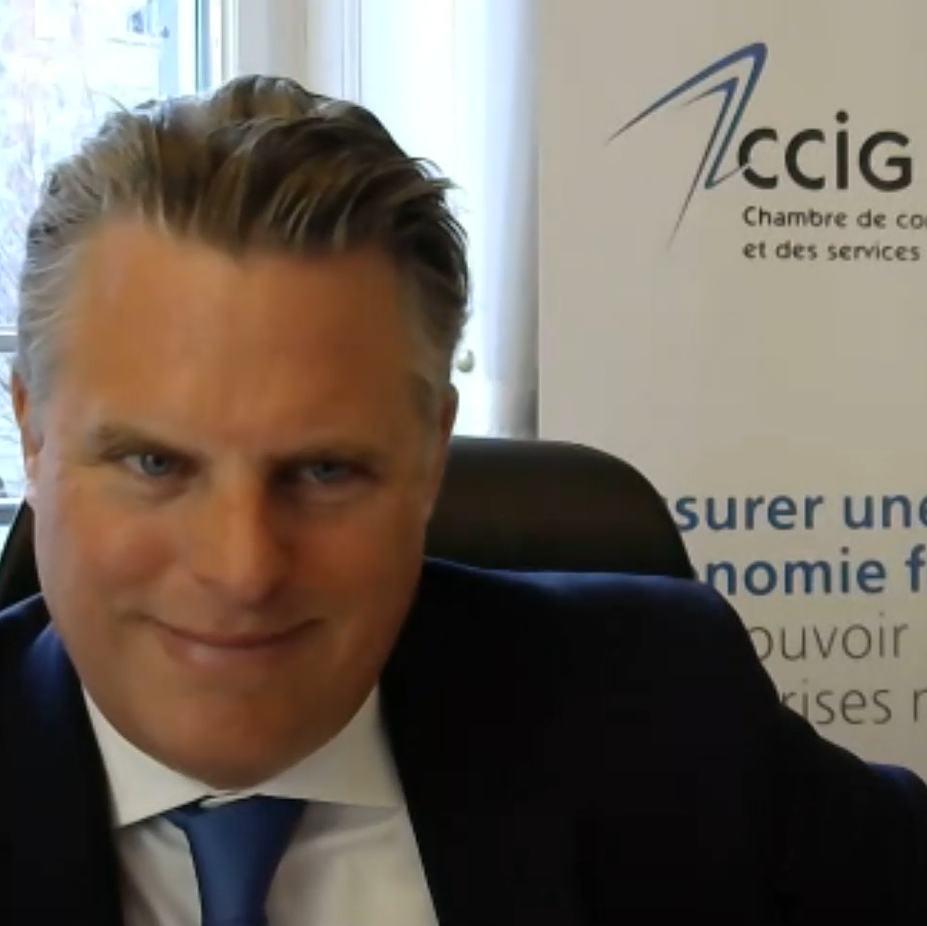 Vincent SUBILIADirector General, Geneva Chamber of Commerce, Industry and Services - CCIG
“I am hopeful that under the dynamic leadership of Mdm President NGUYEN Thi Thuc, SVBG will foster a reliable bridge connecting Vietnamese and Swiss businesses. The Embassy and Trade Office will accompany and support SVBG's activities in the coming time, practically contributing to the bridge of cooperation between the small and medium business communities of the two countries." 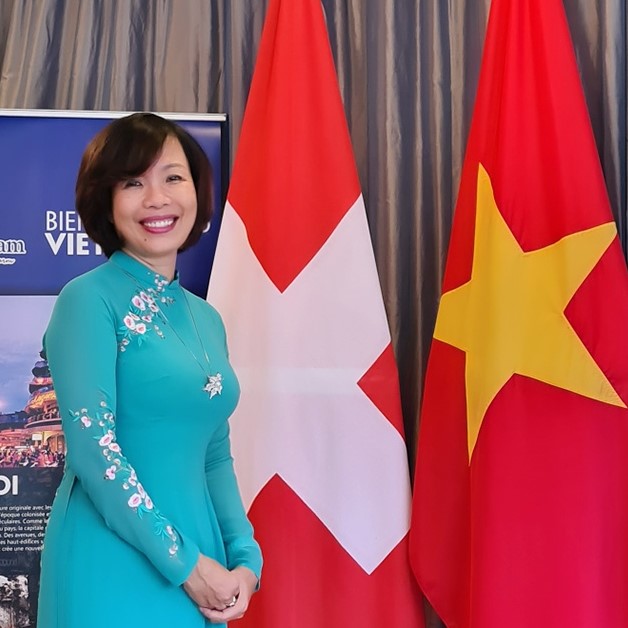 Dr. LE Linh LanVietnamese Ambassador to Switzerland
“In advance, we wish you plenty of success for your new undertaking and look forward to staying in touch with the new Swiss-Vietnamese Business Gateway, based in Switzerland.” 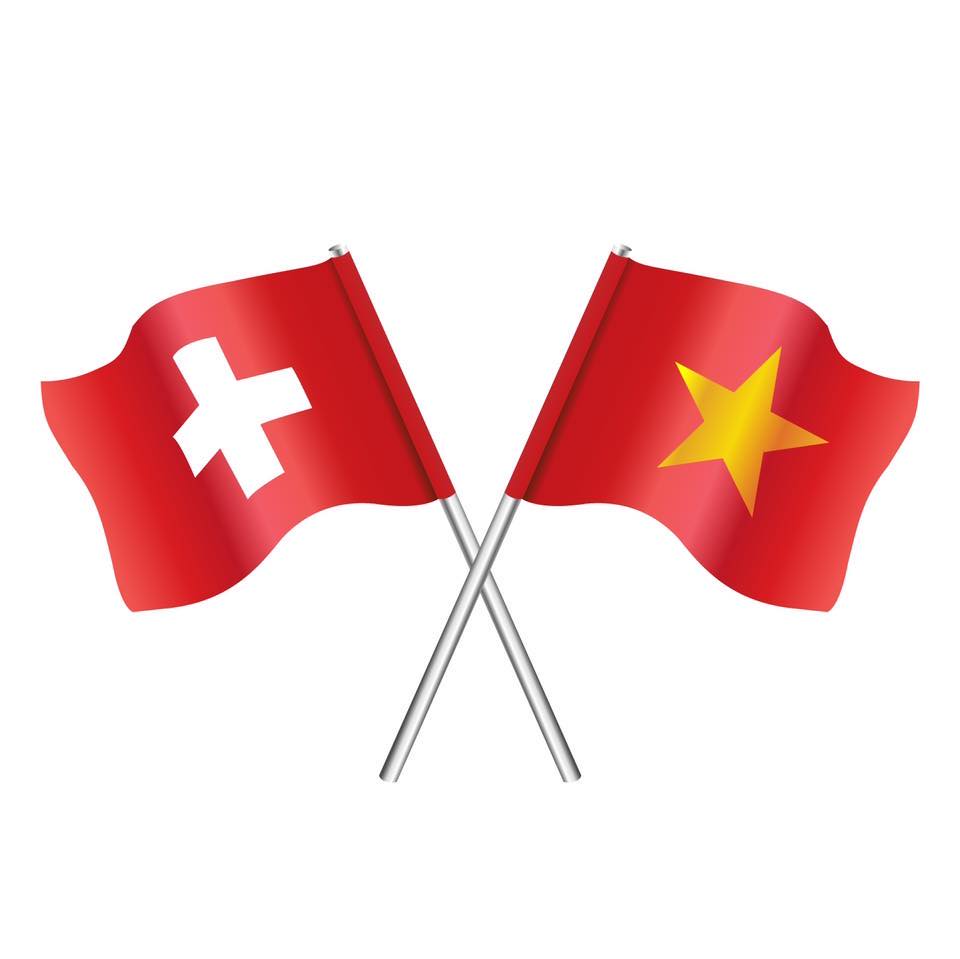 We carry out all work with the greatest responsibility and accountability.

We spare no effort for the legitimate benefits of Members, Partners and engaging Parties.

We practice and encourage the highest respect of law and regulations, of cultural differences and for each other.

Our Scope of Activities

Acting as a promoter and facilitator, SVBG is equipped to:

An entrepreneur passionate about the environment, Axel has a love for the sea turtles in his Father’s native land of Vietnam. Born into a family of entrepreneurs in Lausanne, Switzerland, at the end of his studies in 2008, Axel went to Vietnam to open a restaurant named L’Européen in Ho Chi Minh City. Passionate about helping Vietnamese sugarcane farmers and driven by discoveries of the crop, in 2015 he set out to create the first Swiss agricultural rum fermented at low temperature. Today, Poulo Condor Rum made from sugarcane is available in Switzerland and will soon be available in a barrel-aging range. In 2019, while visiting a friend in Vietnam he discovered a prototype of vegetable straws. From there was born the idea to create straws made of agricultural biomass to fight against the negative impact of plastic pollution on sea turtles and marine life. Since that day he has dedicated his time and energy to co-found and run The Happy Turtle Straw company and to promoting single-use plastic-free consumption.

Born and grew up in Vietnam, Thuc Minh is a distinguished journalist with extensive international exposure, now destined to Switzerland where she calls her second homeland. She founded the Swiss-Vietnamese Business Gateway to link up businesses and promote stronger relations between the two countries, for which she has received strong backing from government agencies and business communities of both nations. Previously, Thuc Minh worked for Thanh Niên, representing the Vietnam’s influential newspaper in various countries in Asia and Europe and assuming several senior positions such as Managing Editor of the online English edition and Singapore Bureau Chief. The career of a journalist over the past 15 years allows her to interview and interact with innumerable heads of state and government, diplomats, politicians, scholars, journalists and entrepreneurs worldwide. That has endowed her with a large network of contacts and knowledge in various fields in diverse cultures, political systems and business environments. Thuc Minh obtained a Bachelor’s in Biology from University of Science of Ho Chi Minh City, Vietnam, and a Master’s in Human Ecology from Vrije Universiteit Brussel, Belgium.

Nhat is a Vietnamese refugee who grew up near Geneva in Switzerland. He graduated with a Master Degree in Management at HEC Lausanne in 2006 before going to Tokyo, where he started working in the web industry and founded his first social business to support victims of the Japan tsunami in 2011. After returning to Switzerland in 2015, Nhat provided web marketing consulting services before creating in 2017 the nonprofit organization Water Inception, whose mission is to provide off-grid water generators that can produce drinkable water from the air to refugee camps facing water scarcity. He has since co-founded TheHappyTurtleStraw.com in 2019, a social company with the mission to replace all the plastic straws with edible straws made of potatoes and tapioca, in order to contribute to the protection of oceans and endangered sea turtles around the world. Nhat speaks 6 languages, is a TEDx Speaker and a Global Shaper from the World Economic Forum.

Mr. Pierre SCHIFFERLI is active in both court litigation and international arbitration. His extensive professional experience allows him to advise and represent clients in complex cross-border litigation, which involve numerous parties and numerous countries such as the United Kingdom, the United States, Brazil, the Russian Federation, Nigeria, and the United Arab Emirates. After being a member of the Geneva Parliament and of the Geneva Constitutional Assembly, he became a deputy Judge at the Geneva Court of Appeal. His principal fields of activity cover all forms of commercial disputes and extend notably to the areas of white-collar crime, international mutual assistance in criminal matters, international asset recovery, insolvency and bankruptcy, inheritance, as well as commercial law. His experience as research assistant at the University of Geneva in the fields of Trademarks, Patents and Copyright also allow him to advise clients in intellectual property issues.

A Swiss national born in Vietnam, Mr. LUONG VAN MY Thien has extensively travelled the world and has significant experience in dealing with government authorities, NGOs and media, and managing projects in cross-cultural contexts. He started his career with the public administration of the Canton of Vaud, the news media in Lausanne, then in the courts of justice of the Canton, before joining Nestlé at its headquarters in Switzerland. After 12 years in the legal functions with Nestlé, Mr. LUONG VAN MY was expatriated to Southeast Asia then dispatched to Vietnam to seek the re-entry of the multinational into the country in early 1990s. He spent 6 years establishing and expanding the presence of Nestlé in Vietnam before returning to the world’s No.1 food and beverage manufacturer’s headquarters. He spent his last 15 years with Nestlé in Corporate Affairs functions dedicated to reputational risk management, compliance, and Policy Application and Management at a global level. Mr. LUONG VAN MY graduated in Law, Social and Economic Sciences, and Human Ecology from University of Lausanne and University of Geneva, respectively. He later studied Business Management at IMD International in Lausanne.

A Doctor of Law trained in the former Soviet Union, Mr. PHAM Sy Chung is an expert in appraisal of foreign and domestic investment projects with state budget. He worked more than 30 years continuously for the Vietnam’s Ministry of Industry and Trade holding several senior positions such as Deputy Director General of Planning and Investment Department in charge of foreign and domestic investments with state budget, and Director General of Planning Department in charge of foreign investment and foreign contractor. He was also Trade Counsellor at the Vietnam Embassy in the Czech Republic. Retired from the public service since 2014, Mr. PHAM is currently participating in the training of Master and Doctor of Law at Vietnam Academy of Social Sciences and consulting on foreign direct investment projects into Vietnam and from Vietnam into foreign lands, M&A, export and import contracts, domestic investment, and protection of intellectual property rights. He has been an Arbitrator at the Vietnam International Arbitration Centre (VIAC) since 2002.

Viet was the founder of GoEat Me - a food discovery app founded in Switzerland and had accompanied many companies in their product/software development, digital transformation, and customized technological strategies from zero to success. He previously did his study at Luzern University of Applied Sciences and Arts with a degree in International Business Administration, and École Polytechnique Fédérale de Lausanne (EPFL) for Entrepreneurship and Innovations. Besides, he is also the founding member and former Vice President of Swiss Alumni Association in Vietnam (SAAV). Having over 10 years of experience in Technology and Business Development with extensive networks in the tech industry and retail areas, he is currently leading V&K Investment Group in Vietnam.

Cương is a passionate citizen of Ho Chi Minh City, who wishes to dedicate himself to the development mission of the City. He regularly participates in the City’s Foreign Direct Investment promotion events to share his experience in actualizing FDI investments in the manufacturing sector. Cương has nearly 20 years working for both private local enterprises and multinational corporations. His diverse experience encompasses the industries of engineering and construction, automotive, healthcare, and manufacturing. He advises on and implements market researches, market entrance, marketing, and business development while holding the skills to work smoothly with the local authority. Cương enjoys supporting foreign investors who come to invest in Vietnam. Taking over the role as Chief Representative of SVBG in Vietnam, Cương finds himself on a mission of realizing the vision of SVBG in promoting bilateral business connections, Swiss investments in Vietnam, and exchange programs for R&D of the two countries.

After graduated with a Bachelor’s in Finance and Banking, Hoa worked for international banks and concurrently as a freelance model in Ho Chi Minh City for 5 years. Hoa has joined various beauty competitions and won several prizes such as second runner-up of Miss Vietnam Ambassador 2018 and Top 10 Global Asian Model World 2019. She represented Vietnam at Miss Earth 2020 where she finished as the Winner of National Costume Competition for Asia & Oceania area. Hoa is now working for a real estate technology start-up named Remaps and acts as one of the community advocates at Drinkizz, a company producing organic natural energy drinks. Being entrusted with the mission of a Miss Earth, Hoa regularly participates in and promotes environmental protection projects such as developing Eco-tourism in Vu Quang National Park, Earth Hours, etc. as an ambassador.

Thao Nguyen (Sharon) earned a double Master’s degree in Business Administration and in Strategic Management which is jointly provided by the Swiss IM&H Institute in Switzerland and the University of Chichester in the UK. Along her education journey, Sharon has proactively participated in extra-curriculum activities with strong conviction that doing something matter to people, life will be more meaningful. She has been selected as an Ambassador of the Swiss IM&H, and become Deputy Project Manager of Young Entrepreneurs Tribe Organization in Lucerne, Switzerland. Sharon has strong skills in business analysis, project management and financial risk management. Joining SVBG, she is committed to helping strengthen the business relations between Switzerland and Vietnam. 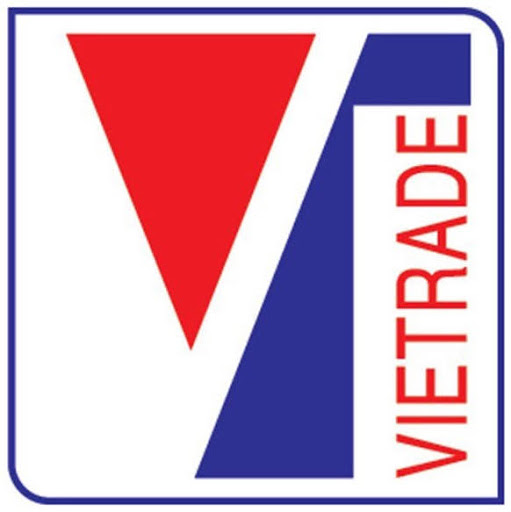 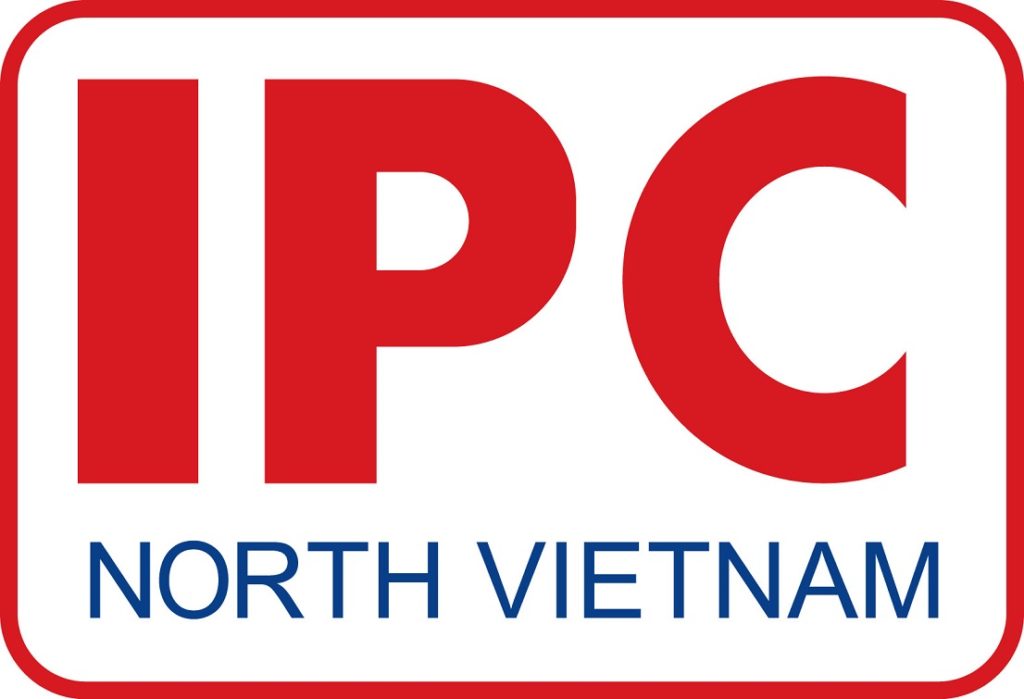